A small town lies stranded on the wrong half of a planet split in two.

An isolated city of flame stands in defiance of a frozen wasteland. The moon colony established by the Apollo 11 mission finds life-lengthening compounds on its surface. A city explodes out of the Prismatic Sea at the convergence point of dozens of leylines.

These worlds all sprung from games of Grasping Nettles, and the stories told about them were unpredictable and cool. The stranded town built a train to the other half of the planet. The city of flame overthrew their iceborne mercantile overlords. The new settlement on the moon held elections in an attempt to distance themselves from countries on Earth. And of course, the city in the Prismatic Sea succumbed to the power of the Shapechanger Witch Cartel.

Grasping Nettles is a worldbuilding game for 1-6 players about a community and its story over the course of generations.

You take turns dictating various things about a world of your creation. On your turn, you move one of three faction pieces around a central game board called the Wheel and perform the action you land on. Actions include defining factions, describing locations, discovering issues, creating characters, starting projects, catching glimpses of other communities, and framing scenes.

Once all game pieces land on the Generation action space, you look at everything created so far and describe how it changes over time. You can then continue to play to explore the next generation's effect on the world. By the end of the game, you have a whole history of a community brimming with factions, characters both living and dead, and locations where everything has happened.

Playing a generation in Grasping Nettles typically takes about 1-2 hours depending on your play style. You can string together multiple generations of play in one session, or even come back to your world for multi-session play.

Quick Nettles get your game started when you don’t want to create a world from nothing.

They take care of the first handful of turns in the game, replacing the Starting the Game steps with the seeds of an awesome world written ahead of time. The game contains the following worlds for you to explore:

You're of course welcome to write and release your own Quick Nettles—check out the Grasping Nettles Game Design Guide for more information on licensing for supplements, rules changes, or even full-blown hacks.

As well, you can now listen to the Grasping Nettles Audiobook in your browser.

Physical copies of the game are available for purchase at adamebell.games

Please take a free copy if the price is a barrier to entry for any reason. If you enjoy the game, rating and commenting on the page is a great way to show support and get more eyes on the project! 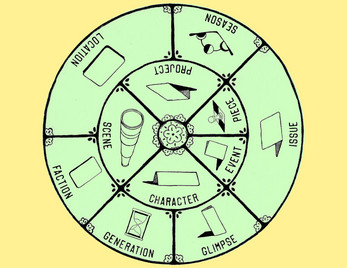 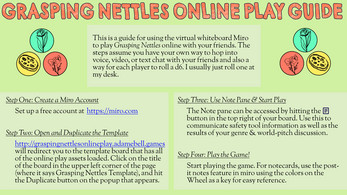