Order a physical copy at adamebell.games!

Legend Has It is an anthology mythmaking card game for one or more players where you create legends prompted by excerpts from the books on your shelves. Take turns telling stories with your friends! 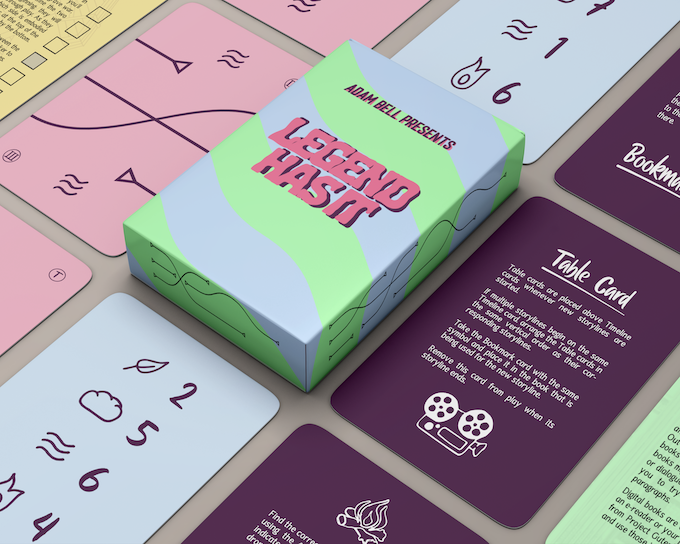 Legend Has It, you'll be telling a collection of stories with your table that revolve around a central theme. By the end of the game you'll have a complete anthology of interwoven myths.

As you play, you'll be placing timeline cards on the table. The lines on the cards represent the storylines in your mythos, with stories ending and starting anew as you play the game. 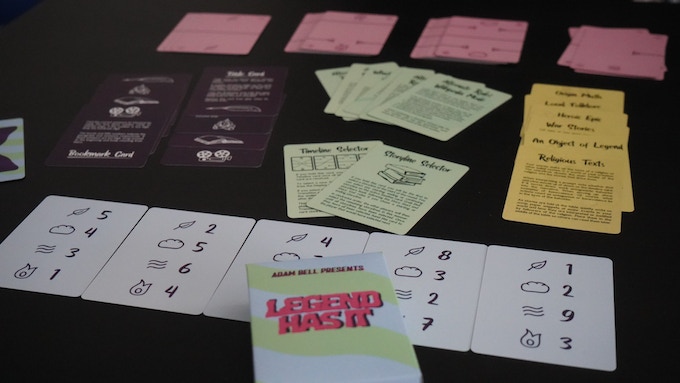 Legend Has It is a card game. It will be printed by the GameCrafter and takes advantage of their Hook Box form factor to print all of the main rules right on the inside of the fold-out box. The game has 54 cards in a variety of types:

Here's an overview of all of the cards from my proof copy of the game:

The digital files include a fully playable version of the game with all of the core cards that you need to play the game in the digital tabletop playingcards.io, as well as instructions on how to import that file into the website. Colorless print & play files are included as well.

A screenshot of the playingcards.io, my preferred way to play Legend Has It online
More information

In order to download this game you must purchase it at or above the minimum price of $20 USD. You will get access to the following files:

I played this game by myself the other day and it was a lot of fun. It felt really cool to use an assortment of books and kind of bibliomancy my way into a story that made a lot of sense despite none of my books being that connected.

I really look forward to trying this out with other people but it’s really nice that it’s not really required. With the simplicity of the cards and set up of the game, in my opinion this would be a great way to just spend some time or to get ideas of ways you can world build if that’s something you’re interested in.

Below is the exact process that I followed when playing which I also shared after I finished in another kind of review/questionnaire:

Since I was playing solo I did a lot of things at random.

I have too many books to choose so I rolled a d8 and found a way to randomize what book I grabbed based on what shelf the d8 correlated with and which area to grab from if I broke down the books in the shelves into eights.

I grabbed a Mythos Card at random (Religious Text) and rolled a d4 to see what column I’d use to progress the story lines.

I used “Aristotle and Dante Discover the Secrets of the Universe”, “Bradbury Stories”, “Harrow the Ninth”, “Dead Astronaut”, The Amber Spyglass”, Swan Sung”, and “The Darkness That Comes Before”.

I interpreted “Religious Text” in the way that most texts tell parables or stories of families to reach morals. So my story was of a group of people that were native to a land which had been from them.

It followed them through many struggles where they lost a lot of their people through violence by oppressors and despite their desire to be peaceful those that remained decided to enter the society of the other communities to eventually also use violence to give themselves enough power to be left alone.

Eventually they were able to kidnap a person in power and forced them to attack his own people which caused a lot of confusion and turmoil which gave the native people the opportunity to build their communities enough to be stand free.

I really liked how it played out (try it solo). I want now to play it in a public library. 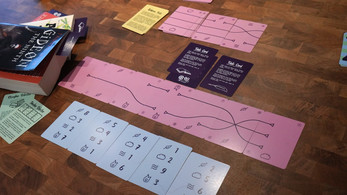 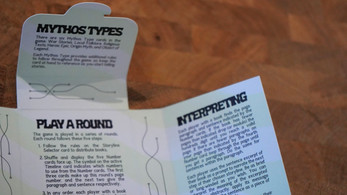 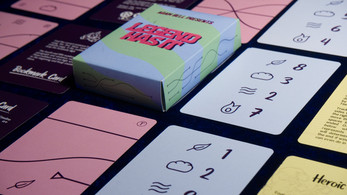