A cracked throne, an imploded sun, revolution at the gates: disaster looms over the realm as self-serving nobles plot and scheme to shape the world to their liking. When those visions clash, turmoil erupts and the court is thrown into chaos.

Uneasy Lies the Head is a GM-less tabletop RPG where everyone plays a member of a tumultuous royal court. Each player chooses a playbook to define their character, and weaves a web of alliance and animosity with the other players.

The game plays out in a series of rounds. On a player’s turn, they carry out a scene to show what their character is getting up to, and optionally execute either one of their playbook moves or a basic move to mechanically enforce their characters will on the narrative. Other players will vote on whether they want that action to succeed, and this opposition makes succeeding with this move more difficult. Can you form enough alliances to enact your secret plans, or will the realm collapse before your vision can come to fruition?

Each turn, a token is pulled out of the bag to see who gets to set the scene.

That player describes their character's actions, with the other players joining in with their own characters or some of the minor characters. At some point, it will be time to execute a move to make some drastic change to the story backed up by the game's mechanics. First, all the other players will vote on whether they want the move to succeed. This sets the die roll's difficulty.

Players will spend tokens to get dice to help or hinder the move's success.

Then the dice are rolled! For the roll to succeed, the active player needs as many unique die faces as the number of players who voted against the move + 1. Interfering players cancel dice that match their own.

Each move drives the story forward on both success and failure, and then a new turn starts. As play continues, the background disaster looms ever larger. The game comes with six setting backdrops to start your game from. Would you like to play as the General in of a space fleet, or the Monarch of a high school student body baffled by the sudden disappearance of their gym teacher? Take your pick and then play to find out what happens.

In order to download this game you must purchase it at or above the minimum price of $8 USD. You will get access to the following files:

Please do not hesitate to grab a community copy. If they run out, shoot me a message here or on twitter (@adamebell) and I'll add some more. I want my games to be accessible to everyone, so take a copy for yourself. No questions asked!!!

If you like it, please do rate the game here on itch.

Uneasy Lies The Head is a GMless trpg that is, despite the format, fairly competitive and significantly crunchy.

It's also somewhat close to a LARP in some respects---in that it's partly a social game with hidden agendas, and that you're cooperating and competing against the other players without ever being truly certain what their objectives are.

Uneasy can be a little tricky to decipher when you're just starting your read-through, as it introduces ideas without immediately explaining what they're for. It also has some oddness to its balance, where turn order is determined by tokens pulled out of a bag, and you might simply not get a turn if the End Of Round token is pulled before any of yours are.

On the flipside, there's an actual character class for being late to the game / having to leave early, and that's a really cool add that allows people to get in on the competitive aspect of the game without needing to make a large time commitment.

Gameplay itself revolves around votes, which are guided by some really crunchy mechanics around setting difficulty and rolling dice, but which ultimately translate to "the more people who speak out against you, the more likely your action is to fail."

The setting of the game is customizeable, but works for basically any group where the long-standing power structure has suddenly become vacant. Several possible settings are provided with the game, and all of them are seriously flavorful. They range from Bloodborne to Junji Ito to the French Revolution to age of sail piracy.

Overall, I think this is a really strong choice for groups that like hidden information, social competition, and storytelling that doesn't sacrifice the feeling of challenge that comes from trying to master a game. Uneasy is pretty versatile, and can be adapted to both different settings and different gameplay styles, and is probably a solid impulse-buy for folks who like Fantasy Flight's Battlestar Galactic board game, or voting games like werewolf.

-Page 8, Spread a rumor/Dictate a sermon, these don't seem to do anything mechanically, which seems a little weird given everything else having mechanical applications.

-Character playbooks are split in half in the "bigger fix" version of the game, and this makes them a little difficult to read and navigate without printing them and taping them together.

I don't think I have ever seen a game that so fully embodies the concept of court politics. All the main characters in usual intrigues are there (the Visitor is an unexpected but welcomed addition) and they are perfectly exemplified in the proposed backdrops as well as the special moves they can take. Great work! The dice mechanic is novel for me but the explanation right above me was quite helpful in understanding it. Thank you :)

Thank you for the comment! I'm glad you enjoy the game.

This game includes some super cool mechanics for court intrigue and betrayal that really drive home the theme: definitely recommend. 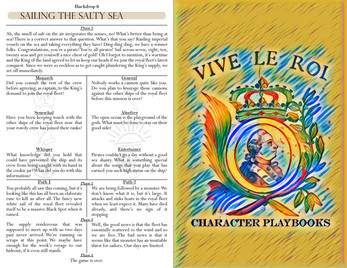 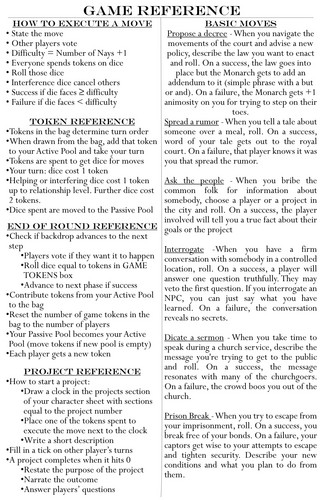 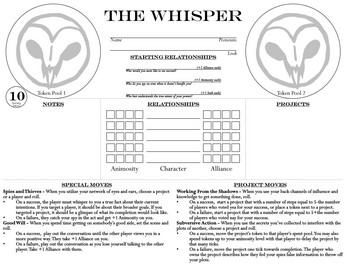 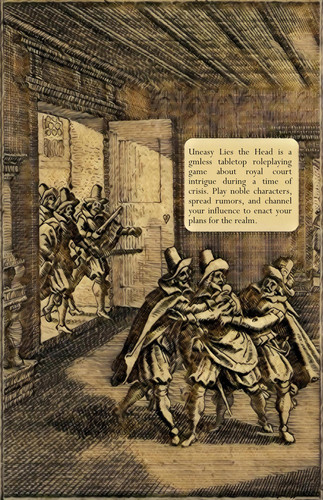