No Stone Unturned is a gmless game about exploring a world long after societal collapse. It's designed to be played as a one- shot or a short campaign of 3-5 sessions.

The game starts with a worldbuilding phase. Together, all of the players will come up with a broad setting, and then define the settlement that their characters are living in and working to help grow. Then, each player privately creates other locations in the world using the holy grail of indie tabletop rpg tech, the blank notecard. These are then shuffled and spread out face down on the table as a map of unknown locations for the players to explore.

You could end here and switch to a different game if you wanted to, honestly. The worldbuilding steps in this game are pretty good and easily ported elsewhere. Assuming you're sticking with it, the next step is to create characters. Characters in No Stone Unturned are made up of stats, moods, skills, and sentiments. Each of these get everyone on the table on the same page as to who each character is, what they're good at doing, and what they care about.

Then the game plays out in a cycle of adventure and downtime. On adventures, you'll be exploring the locations on the map you've built out. Be warned though, because these locations are full of other burgeoning societies, wildlife, and unstable ecosystems. Any careless move can have drastic impacts on what already lives in the world.

At any point on the adventure, a character might perform an action that endangers them or the world around them. That's when you roll dice and bring in those stats, moods, and sentiments that you built in character creation to determine the outcome and add details to the world around you.

In downtime, the players reckon with the consequences of their adventure and try to make use of whatever they found by addressing their wounds, making plans to repair any collateral damage they did to the world, and taking time to reflect on how they are feeling. After some time, it's back to another adventure.

And that's it! The 47 page zine contains all the rules you'll need to play the game and explore the consequences of leaving No Stone Unturned.

The SRD is all well and good but sometimes it's nice to have all the formatting. Take a community copy!! If there are none left, feel free to reach out to me on twitter and I can get you set up.

thank you for the community copy!

of course! I hope you enjoy the game!

No Stone Unturned is a somewhat cozy post-apocalyptic multiplayer trpg adventure game with a rotating GM seat. It's suitable for one-shots, but it seems to really shine in short campaigns where you can watch the setting grow and shift over time.

The PDF is 56 pages, with solid layout and a ton of really great, simple-but-very-expressive illustrations.

No Stone does't have a single canon setting, but it gives you the toolkit you need to build one, and its gameplay is about watching that setting change over time.

In some ways, No Stone's creation process feels a lot like The Quiet Year (which is acknowledged as an influence,) but No Stone goes a step further and has some crunch to it. You have stats and dice and moods and skills, and you can do cool mechanical stuff like scar the map to effect outcomes.

For someone like me who loves Quiet Year in concept but just flies off into space when trying to play it due to its lack of mechanical anchoring, No Stone is a perfect iteration on the design, and it's kind of excellent for homebrewing a fantasy campaign on the spot as well. Because of its easy worldbuilding and flexible mechanics, if you want to just throw together a casual game during a camping trip or long weekend, this is probably the first place I'd turn.

That said, the dice system *is* a little arcane at the first glance. You roll two dice for checks, and which one needs to be higher to win depends on the circumstances of an individual check. Also, using stats from half of your statline fatigues those stats, so you're incentivized to vary both your approach and your stakes and mix failures with victories.

There's also Downtime mechanics ala Blades, and ways to manipulate dice results and bounce back from failures, so the game has quite a bit of give to it, but getting a handle on the core mechanic feels like it's going to take a couple of reads.

Overall though, if you like games that mix mechanics with narrative, ala Fate or Blades or Dogs In The Vineyard, and if you like worldbuilding and maybe a spritz of post-apocalypticism, this is a very solid thing and you should pick it up. If you need very high crunch, or if you as a player prefer to not have agency in worldbuilding, it might be less for you, but it's still a very good toolkit for setting up an adventuring region or module, and it might have some utility for GMs of big fantasy or sci fi games even if its core gameplay is ignored. 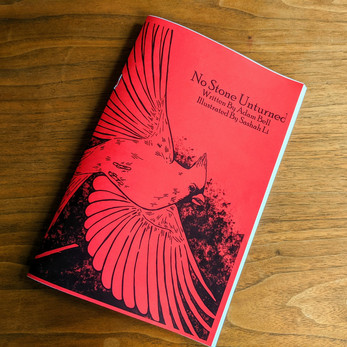 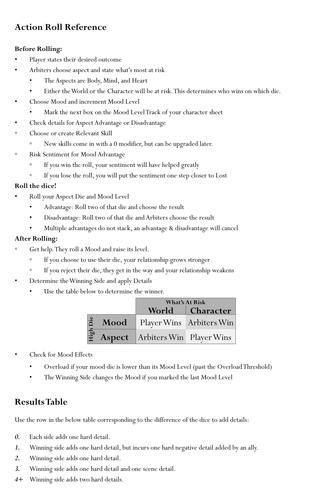 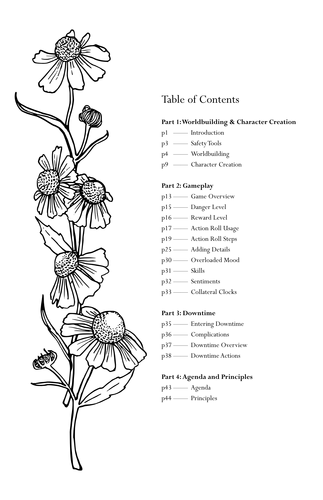 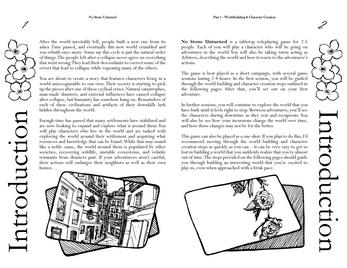