Reliance tells a story of interdependence and inner turmoil in a time after a socialist revolution captured the power of the state in an industrial age city.

Players take on the roles of members of the revolutionary vanguard party in the period of rebuilding after the ruling capitalist forces were driven out of the city. From this point, it will take constant work and decades of struggle and action to build the society they fought for.

It's a game of acknowledging and exploring the challenges of building a world out of the bones of an old one, and of acknowledging just how entrenched the structures of the capitalist mode of production are in every level of our society and mindset.

Gameplay has players confronting and analyzing the contradictions of their new world, and then acting on them to fight back against the forces of reaction and counter-revolution from within their own population and from external powers as well.

Reliance is formatted as two separate trifold brochures: one for the players and the other for the GM. These two pamphlets together are a complete game which can easily play out as a satisfying campaign. Here's the current draft of what they'll look like, though the text and layout are not at all final yet: 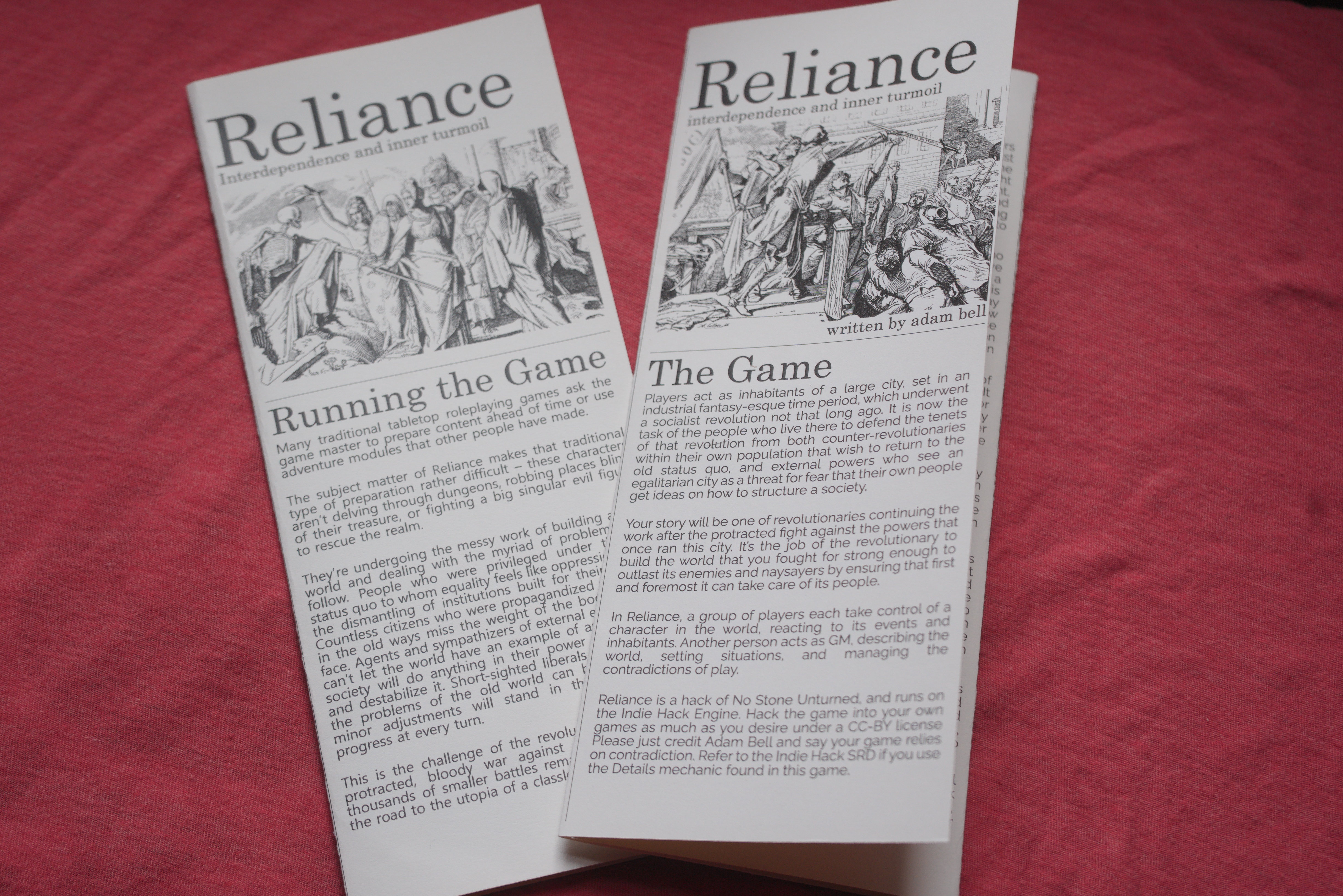 Two Reliance trifolds. One says "The Game" and the other says "Running the Game" 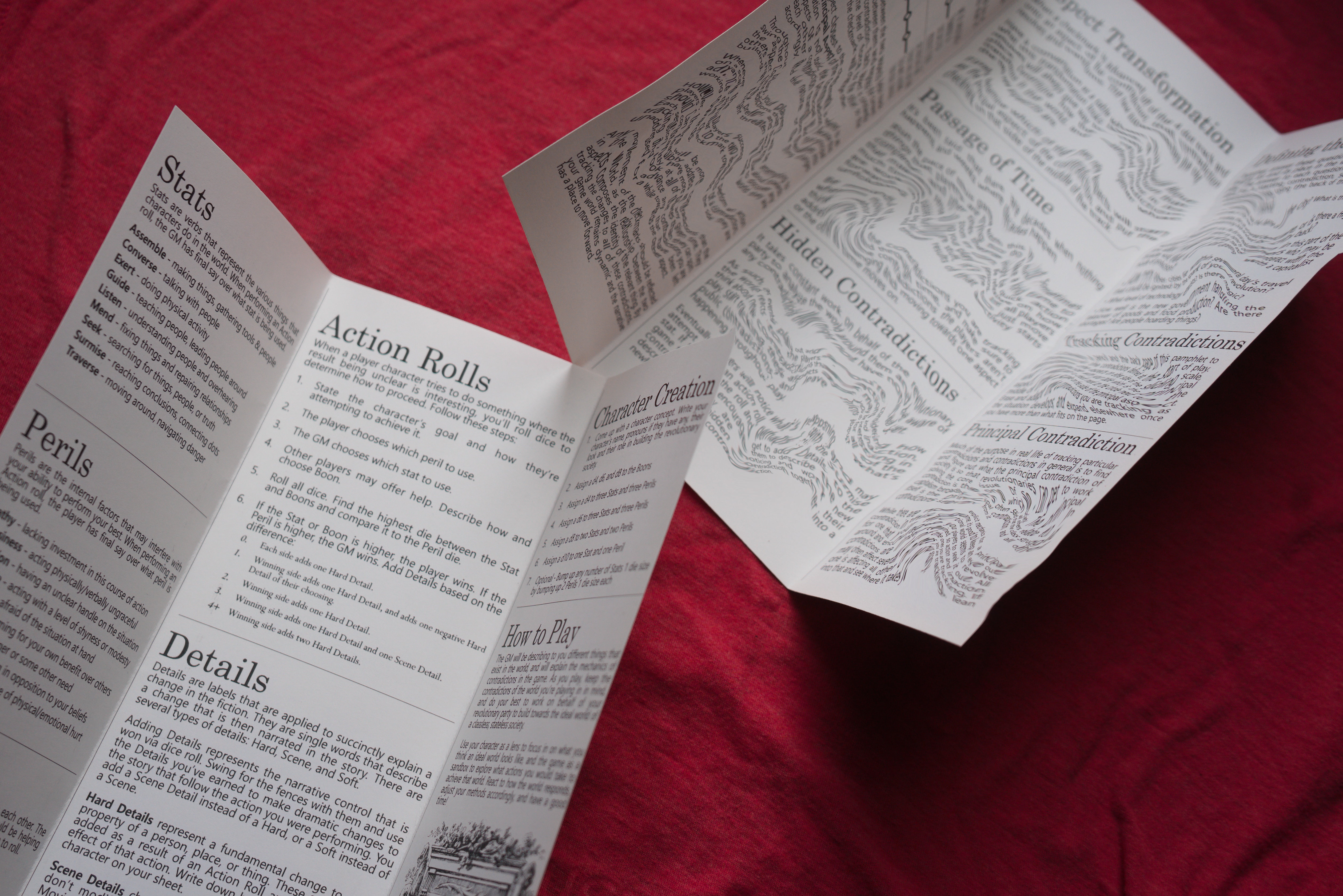 an image of the insides of both trifolds. One has the text obscured digitally 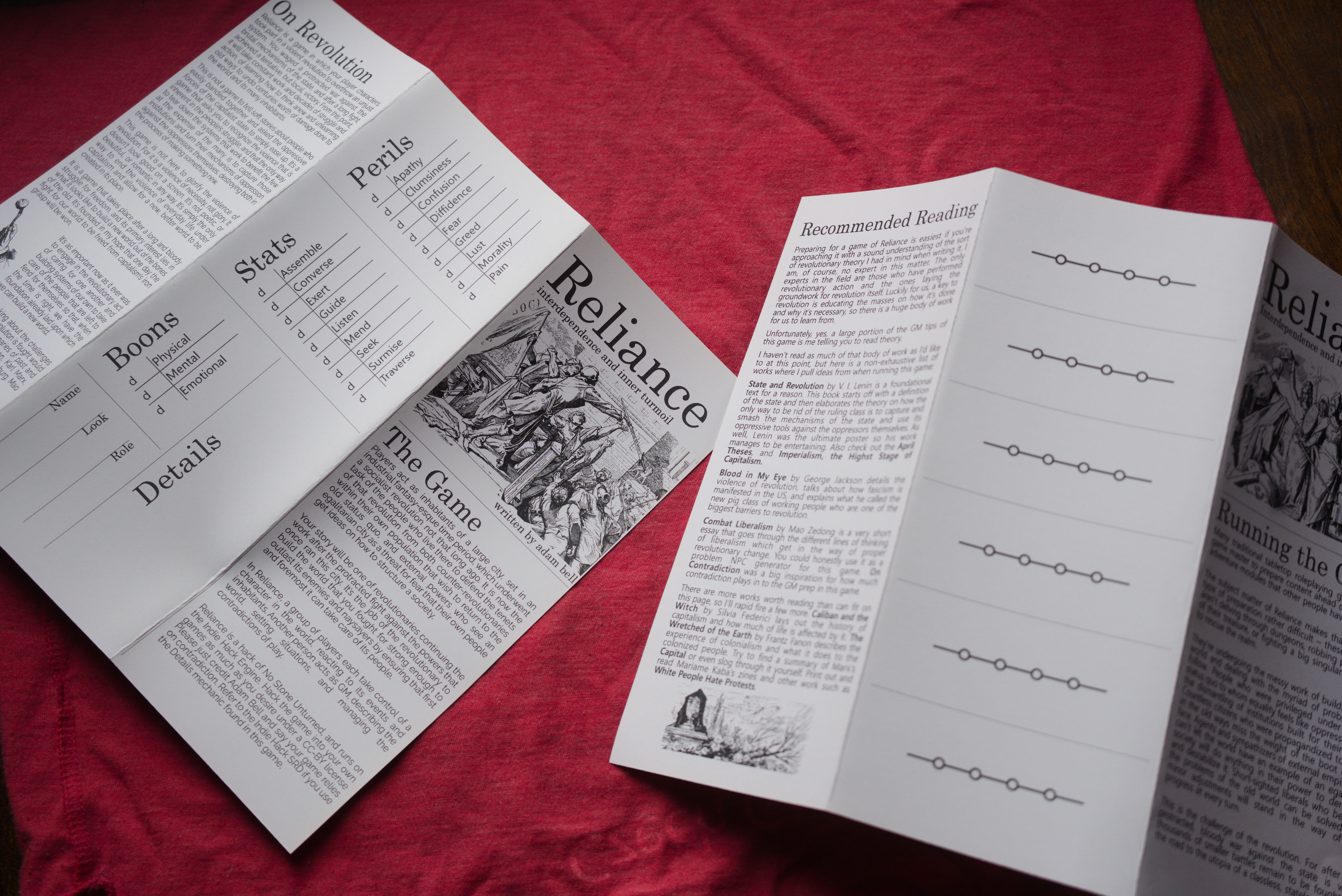 an image of the back of the two trifolds. One has a character sheet in the middle and the other has lines and circles in 6 sets. 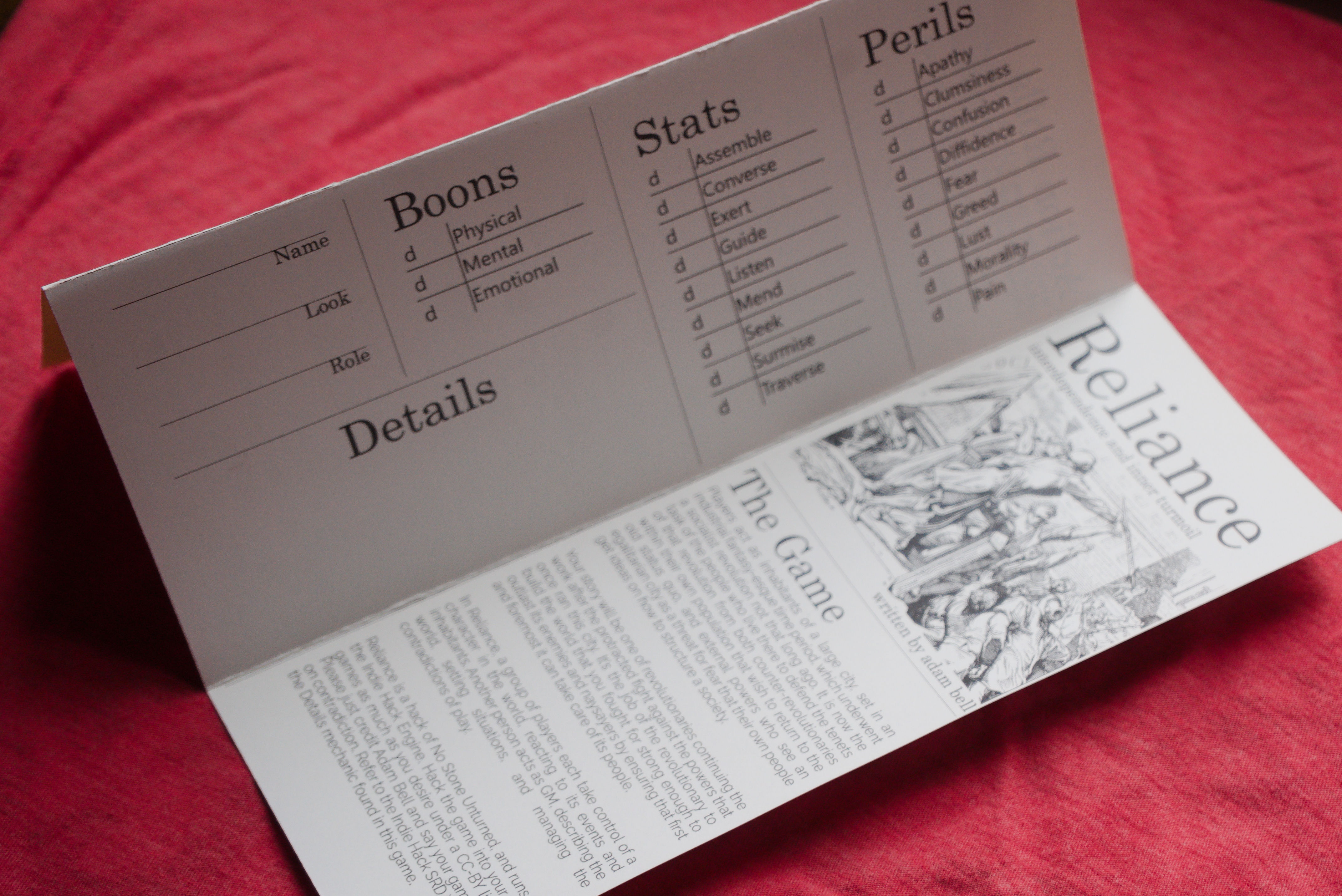 Buying the game at the standard level here on itch will grant you access to both in .pdf form, as well as a collated .pdf of each individual pane of both pamphlets which reads nicely on a phone screen. Additionally, you'll get access to any other pamphlets that get funded as a part of the fundraising here. This has the potential to include pre-built settings, example contradictions, design commentary, and more. The physical copies below will have one of each of the two main pamphlets, but you'll get digital versions of everything else that's unlocked as well.

I'm currently working on finishing the game text and laying out the pamphlets while balancing a few other game projects and also my day job, and so am opening up pre-orders for the game. This is both to gauge interest in this type of game, and also to be able to pay myself for the work that goes into making it. Due to the very important topic of revolution, in writing the game I'm making sure to try to read a good variety of revolutionary theory to avoid the soft versions of revolution that we so often see in media.

I'm shooting to release the pamphlets whenever they're finished, but your pre-orders will help move the game up in my priority list. As such, I've set some funding goals here:

Because of the way reward tiers are set up on this itch page, I can't set up community copies in the traditional way. However, if the price is a barrier for entry, clicking the below link should allow you to download the game for free, and don't hesitate to do so!

In order to download this game you must purchase it at or above the minimum price of $7.50 USD. You will get access to the following files:

Claim this if you want to be reminded when the funding period is nearing an end and the game is ready to be released. I will send you an email through itch as a reminder!

Once the game is finished and released, you'll get all of the digital files of the pamphlets that are unlocked.

Once the game is finished and released, I'll send you a copy of each pamphlet printed on some cream colored cardstock as pictured in the example photos. Please add 4 dollars for international shipping. 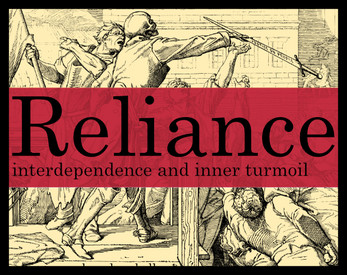